You are here: Home / Tools / How to replace your water heater’s drain plug—and why

One of the most overlooked maintenance items on an RV is the drain plug on the water heater. They don’t last forever, and if you ignore it, the result can be super-annoying later.

Typically the plug gets removed once a year, during winterizing, to drain the water heater. It’s made of nylon, because plastic won’t react with the metal in the tank (a metal plug, even a brass one, can result in corrosion). 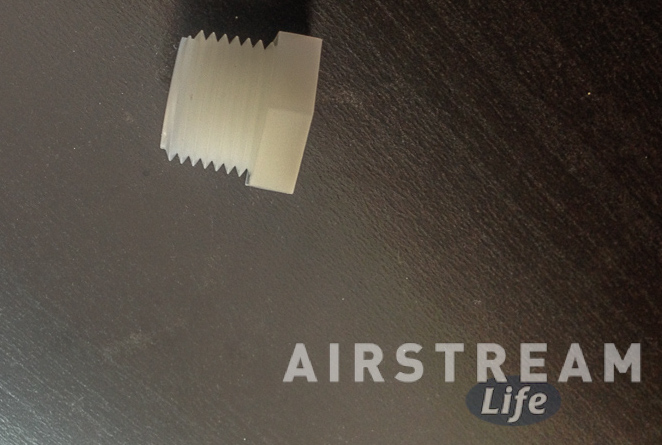 Because the nylon is soft and easily damaged, it should be replaced with a fresh one every time it is removed. But sometimes people (even technicians who should know better) will re-use the plug. This is a false economy.

First of all, these plugs are cheap. They tend to be overly expensive when sold as “RV water heater plugs”.  Try a local hardware store instead, and ask for a 1/2″ NPT plastic drain plug with 15/16″ head.  You’ll probably find them at about a buck apiece, versus $3-4 each online or at RV shops. Get a few spares while you’re at it.

Second, when the plastic gets old or worn, the plug will be prone to leaking or—far worse—it can get fragile. Then the head of the plug is likely to break off when you eventually try to remove it. If that happens, you’ll have to find a way to extract the remains of the plug without damaging the aluminum threads of the drain hole, and that’s a real hassle.  (Ask me how I know …)

(By the way, this is why we include a spare drain plug in our “Little Things Kit of Essentials“. It’s one of those little things that most of us never remember to have on hand.)

I think people don’t like to deal with the drain plug because it seems hard to get to.  Certainly it’s not conveniently located on RV water heaters, but it’s actually simple to remove and replace when you know how.  So I’ll tell you. 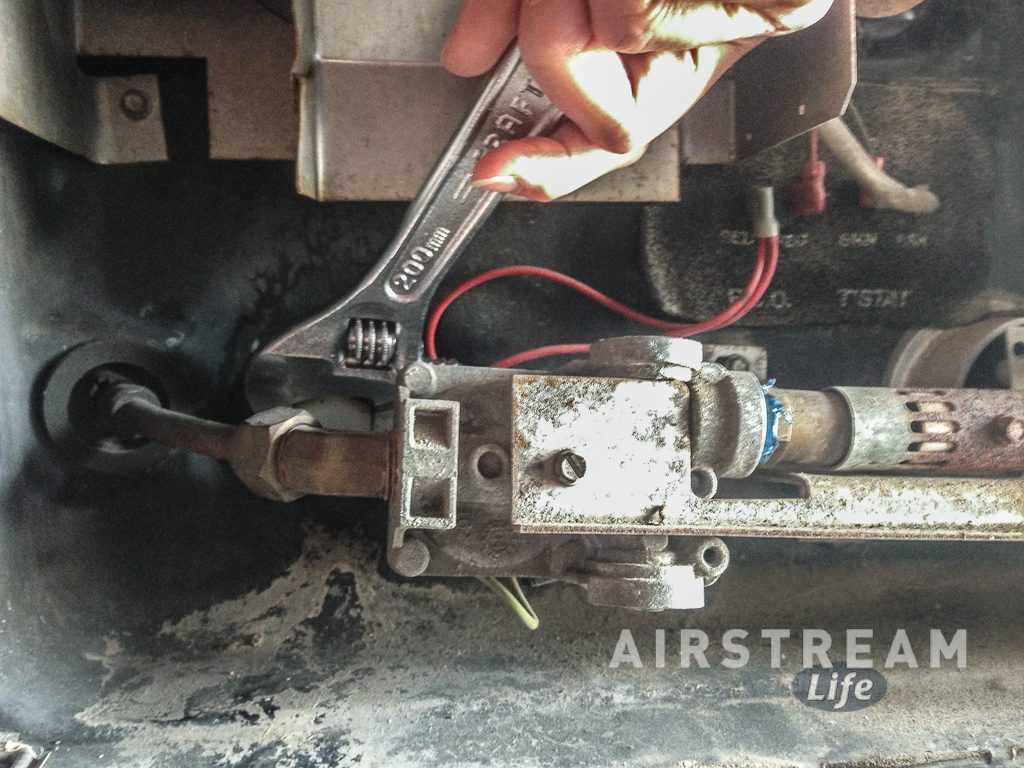 The main thing is not to try to get at the plug with an adjustable wrench. That’s what everyone tries to do because that’s the tool everyone owns.  But an adjustable wrench won’t reach the plug very well, and you’ll probably end up scraping up your hands on the sharp edges of the vent above.

(See picture at left for an example of how not to do it.)

Instead, three simple tools will make this job so easy you’ll want to do it yourself instead of paying a technician $100/hour to do it for you: 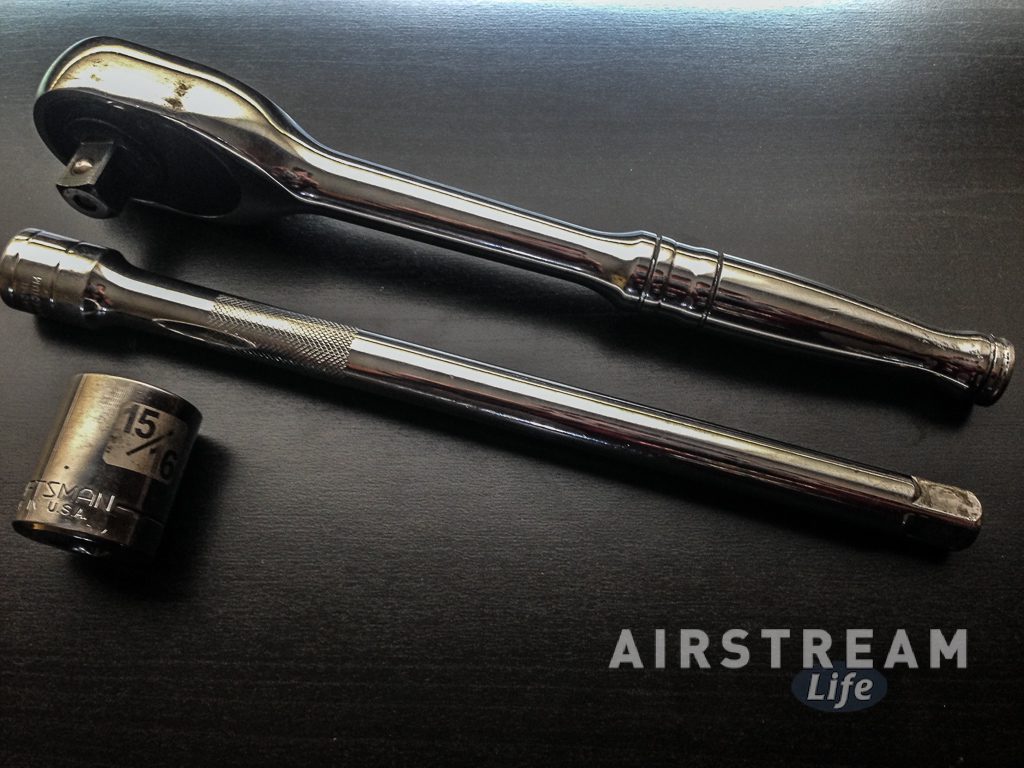 If you have the Airstream Life Tire Changing Kit, you already have the extension and a “breaker bar” that will substitute for the ratchet wrench in a pinch. All you need in that case is a 15/16″ socket (1/2″ drive), which you can get at a hardware store.

Assemble the three tools and use those to easily remove a water heater drain plug in seconds. (Remember, righty-tighty, lefty-loosey.)  Be ready for a gush of water as the plug comes out. A bucket on the ground below the water heater is helpful.  Throw away the old plug so you’re not tempted to reuse it someday.

Installing the new replacement plug is just as easy, with one extra step.  Have some plumber’s tape (aka Teflon tape) on hand to wrap tightly around the threads of the new plug before you begin to thread it in. 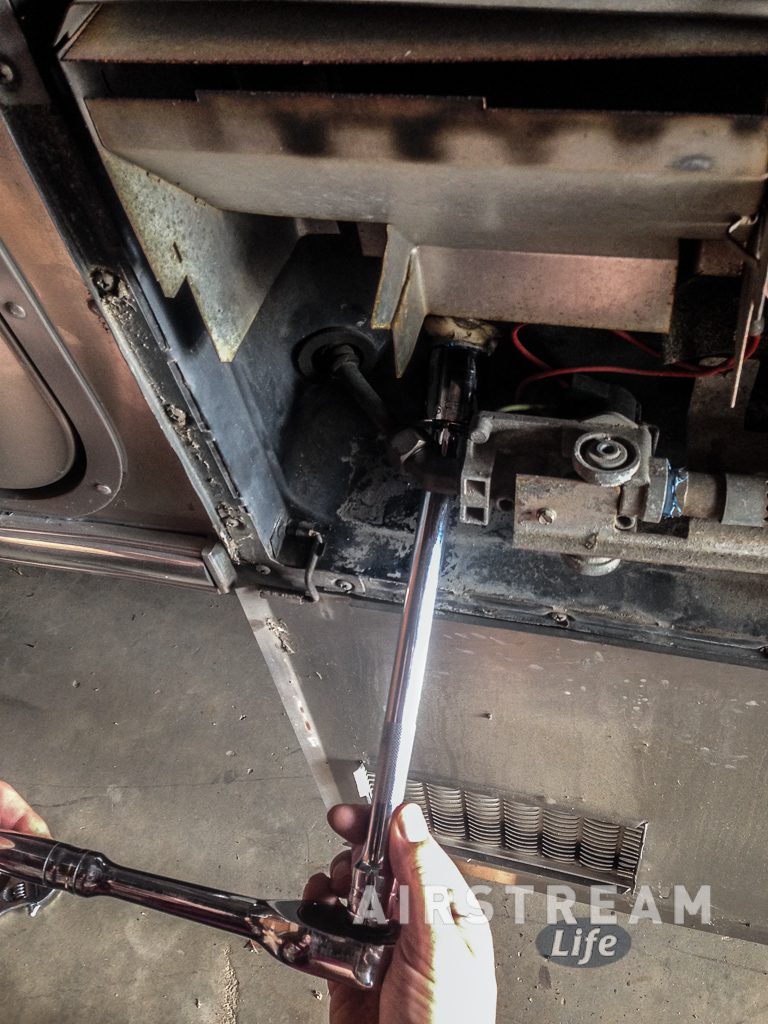 Put on three or four full turns of tape, and stretch it tight as you do.  This will make your new plug leak-proof.  You can skip this step but there’s a good chance the plug will ooze or drip water when the heater is on and the tank is pressurized, so I always use the tape.

Start threading the plug by hand, to make sure it’s not cross-threaded.  You should be able to give it a turn or two with your fingers.  Once you’re sure it is going in straight you can switch to the tools to finish tightening it.

If it leaks, you may have to remove it entirely and use more plumber’s tape on the threads. Don’t over-tighten the plug, because the plastic threads are soft and it could break.

WARNING: Don’t tighten or remove the plug while the water is hot! There is a possibility you could over-tighten it and cause it to break, which would result in you getting scalded by hot water!

Instead, let the water heater cool first.  The fastest way to cool it is to turn off the heater and run the hot water inside until there’s no hot water left.

If you read online RV forums about water heater problems or winterizing you’ll come across plenty of reports from people who struggle and skin their knuckles trying to replace this little plastic plug. Don’t be one of those people.

With a very modest investment in tools and parts this plug can be removed in literally seconds, and replaced just as quickly.  It should be done at least once a year, even if you don’t winterize, to ensure the plug doesn’t age out, and also to drain sediment that may have accumulated in the water tank.