You are here: Home / Lifestyle and travel / From summer breeze to sudden freeze

October is the big weather change-over month for much of the US. In October we can relish the cooler, invigorating Fall weather, and sample a few chilly nights without really having to admit that Winter is coming—but unless you live in Florida it’s hard to avoid the reality that things are about to change for Airstream travelers. By the end of the month the weather forecast is often mentioning the potential for freezing nights, even in the desert southwest.

And that means we need to think about strategies for protecting our Airstreams against the ravages of freezing, snow, and the effect of wind chill while towing.

Unless you’re a brand-new Airstream owner you’ve probably heard about “winterizing” (and you can read about it in my books, on Airstream’s support website, and many other places, so I won’t repeat it here). But what if you’re not ready to put the Airstream away for the winter? What if it just freezes occasionally in your climate, or you want to be able to use the Airstream while you’re on the way to Florida for a winter break? 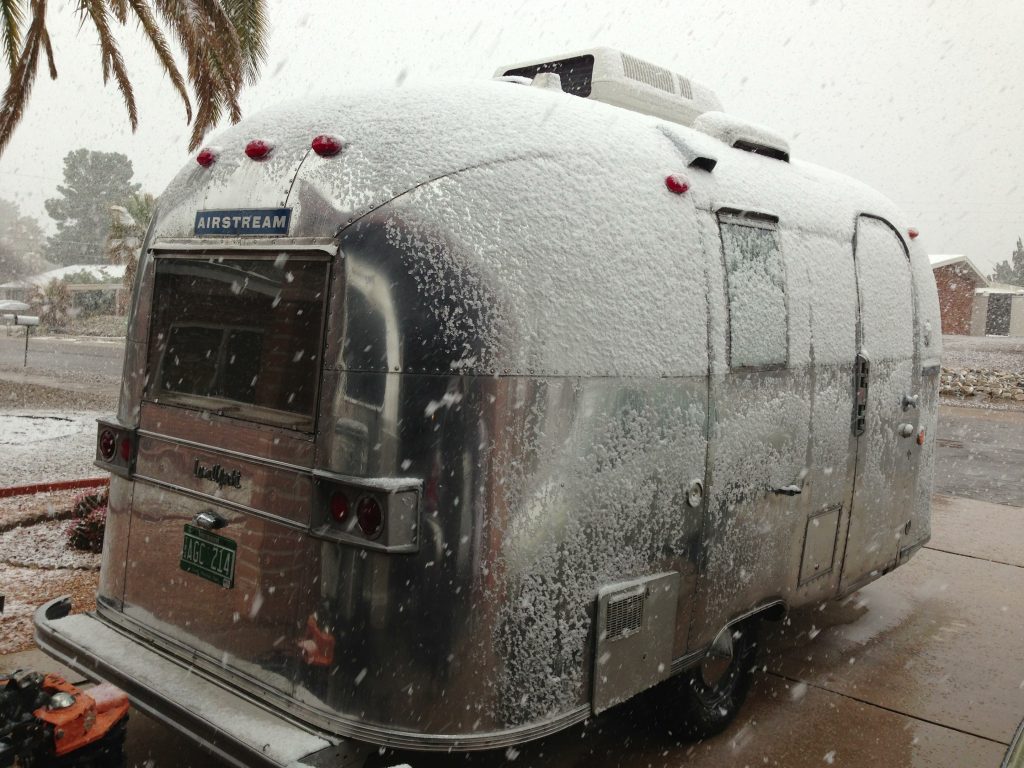 These questions come up a lot. I have many friends in the northeast states who dash down I-95 every winter to a Florida rally or a palm tree-lined park, and stretch out for a couple of weeks of sunshine, smug in the knowledge that everyone they know back home is shoveling snow. On the way south they have to figure out how they’re going to get through a few freezing days and nights while still being able to use the Airstream.

Even here in Tucson we get freezing nights at unexpected times. Last week it was nearly 100 degrees here, but we had a sudden change and last night the temperature dropped into the upper 30s. For this latitude and altitude in October, that’s bizarre, and it forced me to think about what I’d do if there was going to be a hard freeze. Our Airstream is stored in a lot 25 minutes away from our home, and there’s no way to connect it to power.

Fortunately the problem isn’t quite as bad as you might think. Your Airstream is actually well protected against mild freezes. It has plenty of insulation. If the overnight low is going to hover around 30-32 degrees, it’s unlikely the interior of the Airstream will actually get cold enough to freeze in a single night, without any heat source in the trailer.

When you’re considering what to do, think about where you’ve got it parked. In a carport or garage, you’ve got a buffer around the Airstream that will help keep it warm. Even a windbreak will help. It’s the same effect as covering your plants at night.

On the other hand, if the Airstream is parked out in the open on a windy night, or in a low spot where cold air will settle on a calm night, it might be susceptible to lower temperatures than the forecast predicts, and you should be cautious.

For occasional mild freezing nights, the easiest solution is to plug the Airstream into power and put a small electric space heater inside. This will add just enough heat to keep the interior above freezing. It’s a good idea to open cabinet doors where plumbing is located, for air circulation.

But if you’re like me and you have to store your Airstream away from home or power, things get a little trickier. Running the gas furnace at night, even set to a very low temperature, will kill the batteries quickly. The fan motor in the furnace consumes quite a lot of power. You might get one or two nights before the batteries go flat, and then you’ll be faced with the problem of re-charging the batteries. Also, running the batteries flat will drastically shorten their life.

At this point you have to make a decision: winterize the trailer, or tow it home and plug it in? If I’m facing a prolonged cold spell and have no plans to use the Airstream for a month or more, I’d winterize. But otherwise, I’d tow it home so that I could plug it in for a few nights. The only really bad option here is to to do nothing, which means you’ll likely find a malfunctioning water pump on your next trip.

If you do winterize and you’re in a climate where wet snow is a frequent occurrence, make sure you go visit your Airstream regularly. Slowly-melting snow is a real test of the roof sealants. Any tiny leaks will probably be revealed and you’ll want to tackle them ASAP.

For the mad dash out of freezing temperatures to a warmer place, you’ve got different considerations. I’ll assume you have already winterized and have to get through a day or two of towing in freezing temperatures. For most people the safest strategy is to leave the trailer winterized until the daytime temperatures are reliably above freezing. That means you’ll have to get a motel at first, or “dry camp”—which means using none of the plumbing. I know lots of people who do this. They eat at restaurants and use the campground showers and bathrooms until it’s safe to de-winterize.

The cue is when the daytime temperatures go above freezing. When you’re towing, there’s a remarkable wind chill effect on the Airstream that cools it, so even if there’s sunshine beating down on the Airstream it will likely stay frozen as long as the air temperature is below 32.  You can start with a nice warm Airstream in the morning (thanks to the furnace) and within a couple of hours of cruising down I-95 it will be a walk-in freezer.

This happened to me one February while towing through west Texas. The day started nicely enough but a storm came in and the air temperature dropped to about 27 degrees. The wind chill froze the city water fill and I couldn’t tell until that night when the water pump kept cycling. I had to replace it in a parking lot the next day.

Once the days are safely warm, you can de-winterize at the next campground (an easy process, described in my Airstream Maintenance Guide) and go merrily on your way.

There is another very attractive option, for those who live in climates where it only freezes occasionally: Whenever there’s a threat of freezing, hitch up your Airstream and go camping somewhere. It’s a great excuse for an impromptu getaway or close-to-home “staycation”. There are a few RV parks and campgrounds right here in Tucson that I’d be glad to spend a night in just for fun. Or, perhaps find a friend with a roomy driveway and have the Airstreamer version of a sleepover. As long as there’s a plug around somewhere, you’ll be warm and cozy—and your Airstream will be happy too.