You are here: Home / Tools / Six tapes for your tool bag

I’d like to be able to say that once you get your new Airstream you don’t have to worry about anything going wrong with it for years, but that’s not the reality of RV ownership—no matter what brand you buy. Bouncing down the road inevitably takes a toll, specifically in the form of leaky plumbing fittings, loose screws, and broken rivets. The wise Airstreamer travels with a basic kit of tools to deal with those little on-the-road problems.

A perfect example came up a couple of weeks ago when we towed our 2020 Airstream Globetrotter 300 miles out to the quiet desert town of Borrego Springs, CA. After seven hours of driving all I wanted to do was go for a nice walk through the state park campground, but a mysterious puddle of water on the floor changed my priorities. I traced it back to the Airstream’s water pump, where a plastic screwed-on fitting was spitting water.

Tightening the fitting didn’t stop the leak, and it leaked badly even when the pump was off, so I had these options:

Ten minutes later, the problem was solved, thanks to just one indispensable item: Teflon (plumber’s) tape. A few wraps of that stuff on the threads of the fitting and the leak was gone—and our camping trip was saved.

Tape is amazing stuff. There’s a tape for all kinds of problems, and it’s incredibly easy to use. Having a variety of specialized tapes has gotten me out of dozens of jams while traveling. Here are the six types of tape that I always have in my Airstream tool kit:

Let’s go over all six types and see where they’re useful in an Airstream.

As I mentioned, Teflon tape is great for sealing leaking threads on plumbing. If you get a type that is also rated for gas use, you can use it on propane “pipe thread” fittings too, but keep in mind that most of the propane fittings on an Airstream are flare or compression fittings that shouldn’t get tape. I use it routinely on all threaded water fittings, especially the drain plug for the water heater. This is the tape I use the most overall.

We include Teflon tape that is rated for gas and water in our Maintenance Essentials Kit, and our Propane Maintenance Kit, so if you have either of those, you’ve got a roll already.

I don’t use masking tape a lot in the Airstream, but when I have to replace a pop rivet inside the Airstream, masking tape is ideal for protecting the surrounding metal surface. You can see an example in this short video. Sometimes the rivet tool “bounces” and can scratch the aluminum. A few layers of masking tape prevents that. 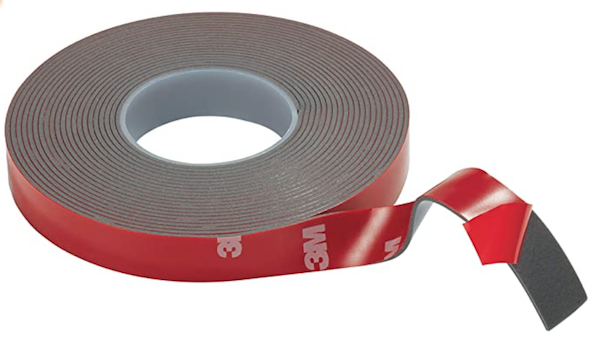 This stuff is surprisingly handy. The 3M “VHB” (Very High Bond) version is great for hanging pictures on smooth walls, and making other attachments where you don’t want to drill a hole. I’ve even used an automotive version of this to secure wires on the Airstream’s roof, and it held up through all kinds of weather and the relentless Arizona sun for years.

The best part of this tape is that it can be easily removed, even years later, without damage and without leaving a gluey residue.

Because this tape stretches rather than tearing, you’ll need some good heavy-duty scissors to cut it.

If you get into little repairs of the Airstream’s 12 volt electrical wiring, you’ll want some electrical tape. But not everyone needs this. When I’m working on electrical stuff I tend to use splices and other (more permanent) connections so the electrical tape gets used very little. I think I’m still using up a roll that I bought in 2010.

This is one that most people have never heard of, and I’ll admit that it’s only rarely needed in an Airstream. But when you need it, there’s nothing like it.

Silicone tape isn’t adhesive. It has the fascinating property that it sticks only to itself and only when you stretch it. This makes it perfect for wrapping around things to secure them like a custom-made rubber band. You just wrap it tight around the object you want to secure, and the silicone instantly fuses to itself. And it’s waterproof, which makes it a perfect (temporary) seal for leaking pipes.

Two months ago on a trip through New Mexico I noticed that two of the acorn nuts that secure a rockguard on the front of the Airstream had worked loose and fallen off. The rockguard was flapping in the breeze and threatening to come completely loose while towing. We pulled off the road but I didn’t have replacement acorn nuts available, and we were (of course) in the middle of nowhere. What to do?

Enter silicone tape. I wrapped the exposed threaded rods with a few layers of tightly-stretched silicone tape, essentially fashioning temporary acorn nuts made of silicone.This held long enough to get to Silver City and stop at the hardware store for new acorn nuts. (I also put blue Loc-Tite on the threads and bought two extra nuts for my tool kit, just in case.)

Like the double-stick tape above, you’ll need scissors to cut lengths of silicone tape. Cutting is also the only way it can be removed. Since it has no adhesive it always comes off perfectly cleanly.

This stuff is the secret weapon of many an RV tech. It’s a putty that comes in a roll, so it can be stretched, trimmed, and formed into any shape you need. Use it to fill gaps around the underbelly (to restrict rodents from entering), plug holes, stop rainwater leaks at the windows, seal cracked glass, or use it as a replacement for glue.

It sticks to almost everything, stays gooey for a long time and makes a long-lasting seal against air and water. Think of it as a substitute for chewing gum.

Last week I found a new use for my roll of butyl tape. Two screws that hold an overhead cabinet hinge stripped out during a recent trip, and the cabinet door was hanging at an odd angle. The screw holes were so enlarged that I had to do the old matchstick trick to make the holes useable again. But the holes were in the upper part of the cabinet, facing down, so the matchsticks kept falling out.

Butyl tape was the perfect solution. I tore off a small piece and smeared the putty/tape around the matchsticks. This made them sticky enough to stay in place. After that, the fix was easy.

The one tape I don’t carry

Did you notice the tape I didn’t mention? Duct tape. Lots of people think duct tape is wonderful stuff, but I hate it. It leaves a gross sticky residue on things, it stretches when I don’t want it to, it’s not very strong, not waterproof, and not resistant to UV. If you carry the other tapes listed here, you won’t need duct tape.

And, if you have all six of these tapes and scissors in your Airstream tool kit, you will find there are a lot of repairs you can do even if you don’t think of yourself as being particularly handy. One of these tapes will probably save your camping trip someday, just like they did for us in the California desert.