You are here: Home / Archives for Fire extinguisher 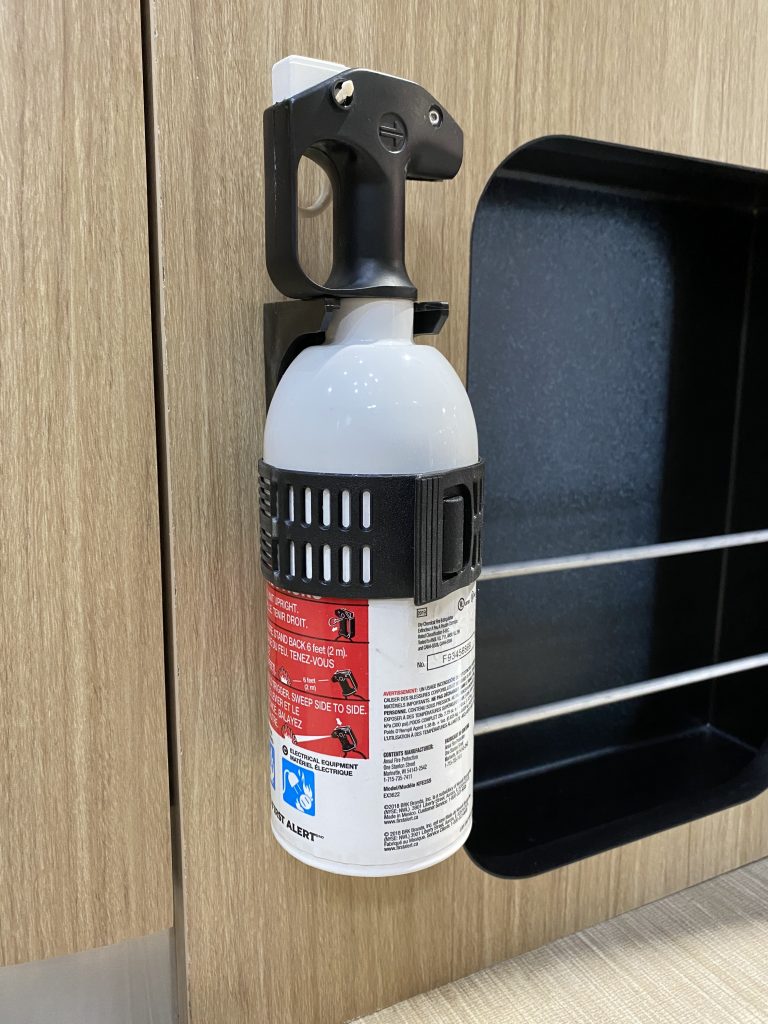 “You have to practice for an emergency like a fire,” said RV expert John Gold at a recent Alumaevent. “I’m superstitious. I believe in Murphy’s Law: the worst possible thing will happen at the worst possible time. If,” he added emphatically, “IF you aren’t prepared. So be prepared!”

Safety step one: check the fire extinguisher in your Airstream. “They are all about the same,” said Gold, speaking of the traditional fire extinguishers that come with Airstreams. “But when is the last time you took one out?”

Also, look at the dial of the traditional fire extinguisher. If it’s in the red, “it won’t work,” said Gold. “Throw it out and get another one. If it is in the green, it may work.” Or, if it has a green button on top, press it down. If it doesn’t pop back up, get a new fire extinguisher because that one won’t help you when you need it.

Change may to will.

Compressed gas inside the extinguisher pushes out a powder that puts out the fire. “Every time your Airstream hits a bump, the powder inside becomes compacted on the side or bottom of the can and won’t come out after a time, only the compressed gas—which won’t put out a fire,” he said. If you feel the powder moving and the dial is in the green, then you know the extinguisher will work.

If you have an Element fire extinguisher, it works entirely differently. It stops fires without leaving a mess of powder, and there’s no need to routinely check it. It doesn’t have the risk of not working because there’s no powder to pack down.

Pull the pin out and put it back in. (It will take some force.) Then give it to your spouse and other travelmates to try it, too. “It doesn’t explode like a hand grenade!” assured Gold. The pin merely prevents you from engaging the trigger before you’re ready.

If the time should ever come when you need to deploy the extinguisher, you’ll have just 9 to 11 seconds to use it, “because that’s all the compressed gas they put in there,” stated Gold. Gold shared a surprising statistic: four full-size extinguishers (much bigger than a typical 2-lb. extinguisher that comes with a Airstream) are required to put out a burning tire. An Element fire extinguisher runs for either 50 seconds or 100 seconds, depending on which model you buy, so if you want more time, upgrading is a sensible choice.

How many traditional fire extinguishers do we need in our trailers? “Maybe two,” he said. “But don’t stress about this too much. Fires in RVs are very rare.” The most common fire in your Airstream will likely be the same one that can occur in your home: a small grease fire on the stove. “You know how to put that out, just calmly smother it,” said Gold. “Put a lid on it, or towel over it.” (Be sure to pass this skill on to the kids and grandkids.)

If there’s a significant fire requiring the use of an extinguisher, and there are two or more of you in the trailer when a fire occurs, “you each have different jobs,” said Gold. “One of you, grab the extinguisher. The other, get the cell phone, its charger, your emergency escape kit, and every living thing out of the Airstream. And nobody go back in except for the person operating the extinguisher.”

The American Red Cross and OSHA recommend memorizing “PASS”—an acronym that reminds you how to operate your extinguisher during the excitement of a sudden fire. Follow the “pull, aim, squeeze, and sweep” technique, step by step:

To flee or not to flee?

After emptying the first canister, “you may need to make a decision,” stated Gold: “Do I go for the second extinguisher or not? That will be determined by your RV insurance,” he said with a smile. “Every one of you has insurance on your Airstream, but not everyone has replacement cost insurance.”

“If your coach is burning, you should know exactly what your insurance will cover and be able to quickly do the math in your head to debate your next move,” said Gold. A proactive phone call to your insurance company before you hit the road will help with this scenario. If the loss pencils out, “be safe, walk away, and buy a new Airstream.”

The problem with propane.

Fire in an RV is a serious matter, and especially in an Airstream carrying so much propane. “Even a small 3-pound propane container, when ignited, would explode and destroy a trailer and damage all the RVs around it,” said Gold. “If there’s a fire in an RV park where you are staying, and you are close by, move your rig,” he cautioned. “Do not stay and watch at a close distance.”

—and let the fire department come, even if you’ve put out the fire. “You want to make sure nothing is burning internally, and verify that the fire is completely out,” said Gold.