You are here: Home / Water and sewer / The secrets of “Drinking Water Safe” RV hoses

Commonly these are called “white hoses” but really the color doesn’t matter. What matters is that they don’t leach toxic chemicals into your water, they don’t leak, and they hold up under tough conditions.

We have tested many types of RV drinking water hoses over the years, and sadly the bulk of them are terrible. While the initial purchase price is low, you end replacing them frequently because they just don’t hold up.

The most common problem is pinhole leaks. For example, the typical RV hose is made of thin vinyl that can’t take being dragged across the ground, or isn’t UV stable. That means eventually the sun or the earth will cause cheap hoses to start leaking.

Also, thin vinyl often kinks, or forms bulges (like an aneurysm) that eventually burst.  Sometimes people try to avoid this problem by using a water pressure regulator on the end of the hose, but that’s just an extra expense to protect a disposable product. And if you drive over the hose while it has water in it, it will usually burst anyway. 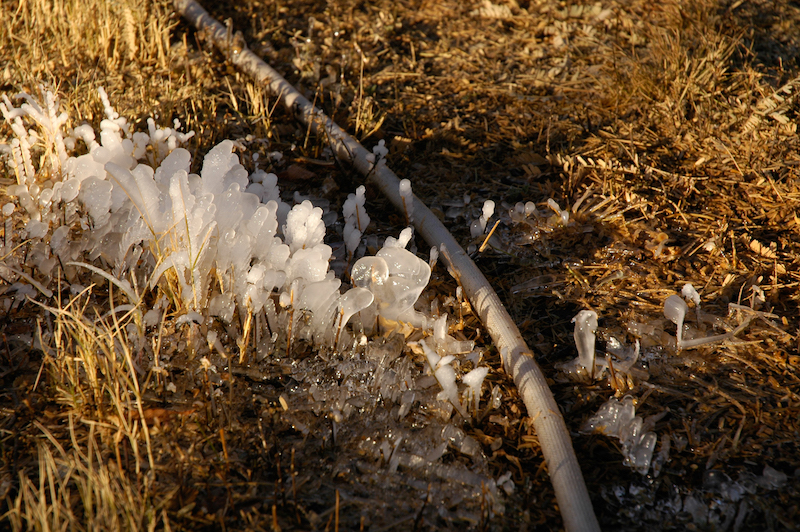 If you’ve ever tried those white fabric roll-up hoses (sold on a reel) you know they’re even worse: with just normal use and abrasion on the ground they’ll spring pinhole leaks like a sprinkler.  See the ice in the photo above?  It’s from pinhole leaks spraying all night long.

So cheap hoses are really not cheap, because you’ll be replacing them every year or two. 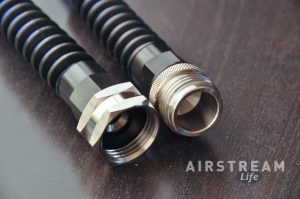 Another common weak spot with drinking water hoses is the fittings.  There are three general types:

Personally, I get frustrated with hoses that stiffen up in the cold.  When it’s chilly outside I don’t want to be wrestling to coil up the water hose.  That’s why I like hoses that stay flexible in all temperatures.

I’ve also become a big fan of pre-coiled hoses like the one pictured below. These things are awesome because they never “forget” how to coil back up.  I’ve stretched this one out until it was entirely straight, and it sprang right back to its original shape afterward.  Plus they’re much lighter and pack smaller than traditional hoses, so I can carry a longer hose with less weight and bulk.

Finally the biggest consideration is safe water for you to drink. All drinking water hoses are supposed to be free of lead, phthalates, and BPA. They should never be made from poly-vinyl chloride (PVC), and they should be completely light-blocking so algae can’t grow inside.

They should also be rated as safe for hot water use, because that tells you the hose won’t deteriorate or leach chemicals when it is sitting in the direct sun all day.

There are a few hoses that meet most of these requirements, but we’ve found only one that meets all of them.  That’s the only drinking water hose we sell, and we back it up with a 5 Year “No Hassle” Replacement Warranty. Check it out here. 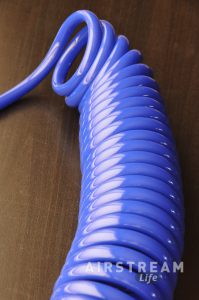 By the way, you might be wondering why we sell a narrower hose than most others on the market. (Our Ultimate Drinking Water Hose is 3/8″ inside, versus 5/8″ in most hoses.) It’s because the 3/8″ size coils up better and is easier to handle.

Sometimes people will think that the hose has to be big in order to get good water flow, but this isn’t true in this case.  All of the plumbing in your Airstream is 1/2″ diameter and the fixtures are designed for a maximum flow of 2.5 gallons per minute. Our 3/8″ Ultimate Drinking Water Hose can deliver nearly 5 gallons per minute, so it’s still more than you need.

Bottom line: there’s no need to wrestle with a traditional stiff and heavy hose that’s bigger than the Airstream’s plumbing can accommodate!