You are here: Home / Lifestyle and travel / How to courtesy park like a pro 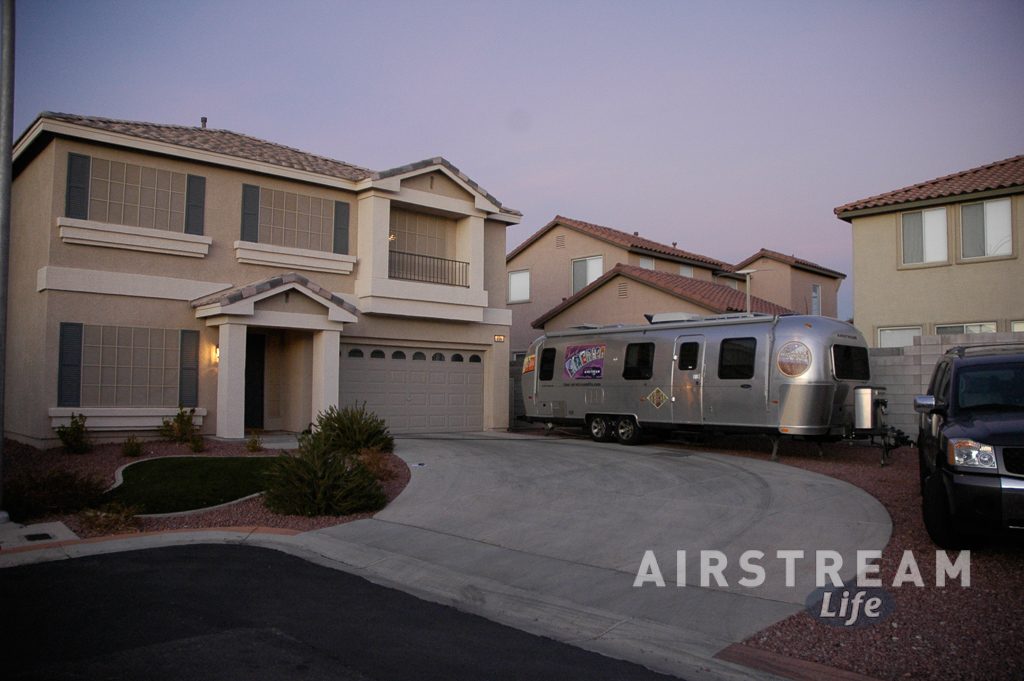 Courtesy parking has to be one of the greatest benefits of being an Airstreamer. I’ve always said that an Airstream is like a passport—because just being in an Airstream opens so many doors. Many times I’ve had people ask if I could bring the Airstream to their driveway (“because they’re so cool”) and it has always been a good experience.

What’s not to like about courtesy parking? You get a free place to stay during your travels, a host who usually wants to show you around or point out great places to visit, often an interesting location (perhaps downtown, out in the quiet country, or near a tourist area), and sometimes you even get invited to dinner.

The best part is that by courtesy parking you’ll often meet great people who become friends. It’s a prime social opportunity for people who love to socialize.

But courtesy parking does come with some risks, and a wise Airstreamer will know how to assess an invitation before showing up. Here are my top tips for “pro” courtesy parkers:

Tip #1: Check out the location carefully. People who don’t own RVs will often underestimate the difficulty you might encounter getting to their home, or backing into their driveway. Don’t rely on their promises or guesses, because they may not fully understand the challenges of towing a trailer or driving a tall motorhome. Do your own research, before you commit.

I like to start by checking Google Maps to see which roads I’m going to have to take to get there. In particular I’m looking for difficult turns and possibly congested traffic areas. This helps me decide what time of day I want to arrive. Then I look closely at the satellite imagery to see if any of the neighborhood corners might be complicated by tight turning radii or parked cars on the street.

Finally, I always ask if there’s a Home Owners Association rule or local ordinance that might prohibit RVs parking in driveways or in front of the house. Sometimes people who don’t own RVs forget about such rules until you mention it.

Tip #2: Keep an eye out for overhanging trees. As you approach, remember that your Airstream trailer is nearly 10 feet tall, and your motorhome may be as much as 12 feet tall. The tree branches that don’t bother your hosts can do serious damage to your Airstream. The same goes for carports, gates, and trellises. Approach slowly, and if there’s any doubt, have your co-pilot or host stand by and watch carefully as you creep the rig forward.

This is a problem more often than you might think. Many times I’ve had to stop and ask my hosts to go fetch their tree trimmers and ladder. Nobody has ever refused to allow trimming of a few branches, although often I end up on a ladder sweating, doing it myself. (After a couple of years of active courtesy parking, I began to consider traveling with my own branch cutters.) 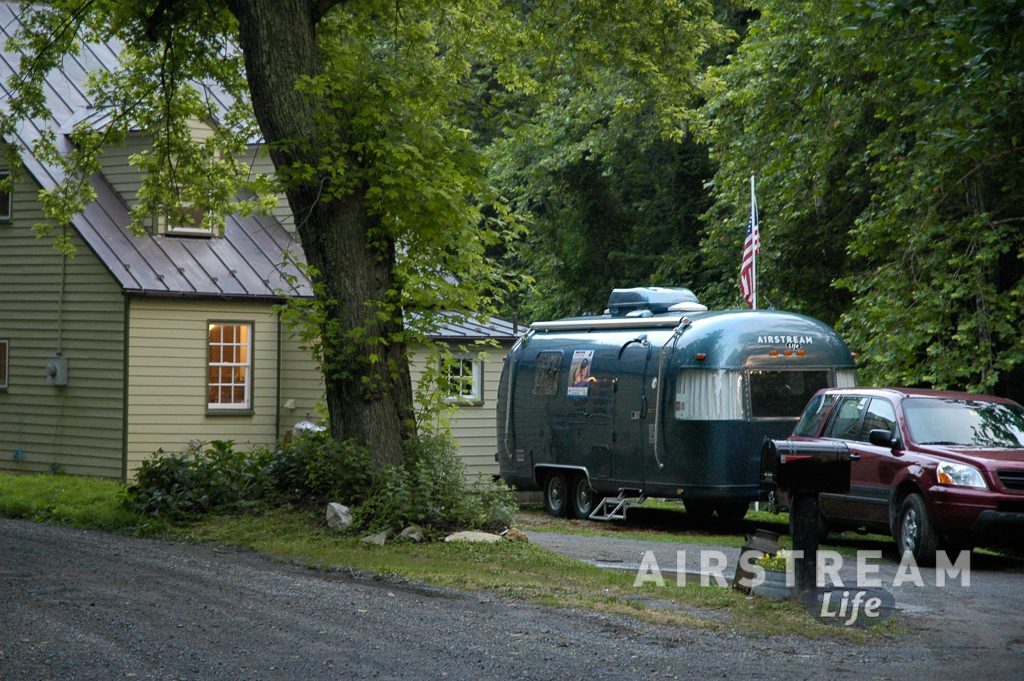 Tip #3: Expect obstacles, and tricky turns. People often forget that their car or truck will go places that are simply impossible for a towed vehicle. Even fellow RV’ers have invited me to places that were impossible. Neighborhoods and driveways aren’t the same as campgrounds. There’s no guarantee you can make all the turns.

I remember a case where a friend with a 22-foot travel trailer invited us to back into his driveway, which was located on a wide street in a downtown neighborhood. When I arrived at 5 p.m. on a weekday, the street was narrowed to about 1.5 lanes by parked cars on both sides of the street, and commuters were using the neighborhood as a short-cut so there was constant traffic. To make it worse, I was towing a 30-foot trailer which had a considerably larger turning radius than his trailer.

The result was a debacle: to back into the driveway we had to block the entire street, and there was still not enough turning space to get into the driveway without mowing down some flowers and toppling the mailbox. “But I never have any trouble backing in!” said my friend, who typically came home from camping on quiet Sundays. After 20 minutes of frustration, I bailed out and went to Plan B, which brings us to my next tip …

Tip #4: Have a backup plan. If things don’t go well, don’t force it. That’s how you acquire dents and scrapes on your trailer. Research campgrounds or other alternate parking situations in the area so you don’t feel obligated to get into a space you really shouldn’t.

One time while checking the satellite view I spotted a stone wall on a tight turn, which my potential hosts had neglected to mention. It was hard to get them to understand that a 30-foot trailer and tow vehicle amount to about 54 feet of length that doesn’t readily go around 110-degree bends, and that stone walls tend to destroy soft aluminum. I felt pressured to “try” to get in even though from experience I knew it would be a mistake, and I might even get stuck. Having a Plan B helps a lot, psychologically.

Tip #5: Try to arrive when your host is home. Several times I’ve been invited to show up while the homeowners are away, and it’s always a bit worrying if I haven’t been there before. There’s always something to ask about when you arrive, like: 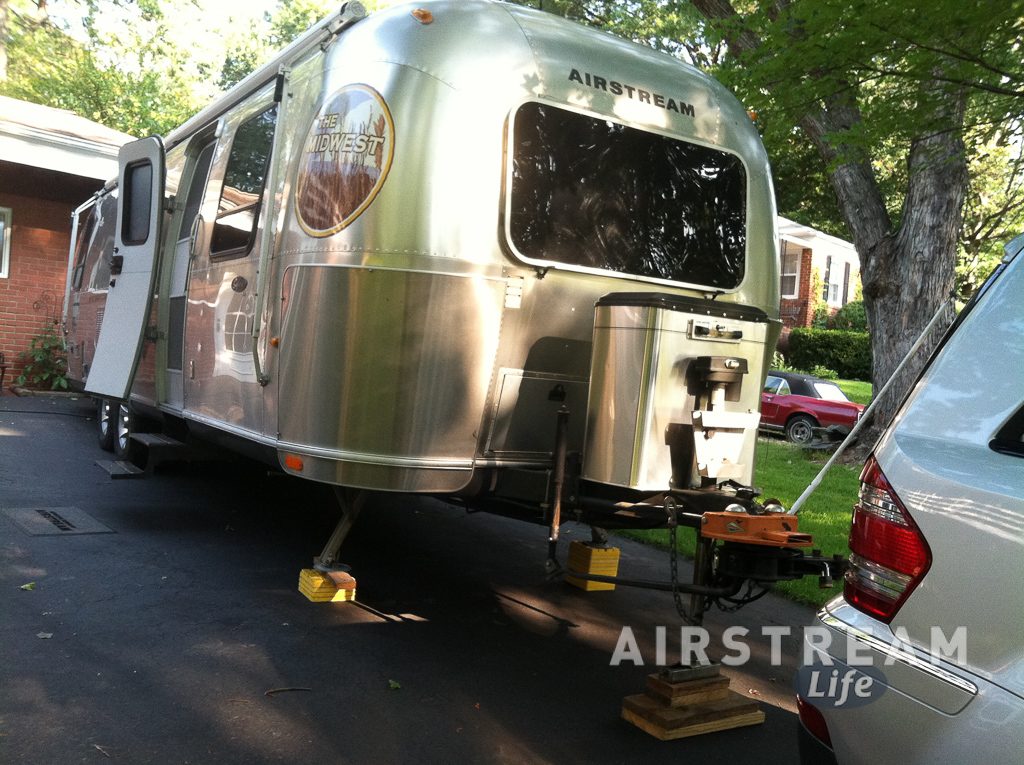 Tip #6: Be ready to level up. Sometimes driveways have steep slopes, and the only to make it work is with a lot of leveling blocks. Check out the picture above. The hitch jack was fully extended and we still had to stack up 10″ of wood blocks.

This happens often in suburban situations, and sometimes there’s nothing to do about it except park elsewhere. If you can get enough blocks to get approximately level, be ready for a wobbly night because even with the stabilizers down the Airstream is likely to feel less stable than usual.

Tip #7: Don’t expect anything from your host other than a little free parking. Courtesy parking is a favor granted to you by your host. They might offer power or water, use of the pool, advice on places to go, or even dinner in the house, but they’re not obligated to do anything. Try to be a good guest by expecting nothing, staying out of the house and yard unless specifically invited, not overstaying your welcome, and showing appropriate gratitude. (Bringing a small gift is always a nice touch, or a thank-you card.)

You’d think this piece of advice is obvious, but lots of people “accidentally” overstay their welcome. If you are suffering a mechanical breakdown that requires a few days to get repaired, or your fridge is empty, remember that’s not your host’s problem. They didn’t adopt you, and they have their own lives to live.

I have been the victim of courtesy-parking guests who were supposed to stay a few days but then decided they were comfortable and didn’t want to pay for a campground nearby. Next thing I knew, the offer of dinner and a free parking spot turned into semi-permanent houseguests who expected daily breakfast and dinner in the house. Needless to say, they were encouraged to move on, and haven’t been invited back since. Don’t force your host to tell you it’s time to go–leave while they’ll still miss you.

Tip #8: Hone your boondocking skills. Like I said, you might not get water or electricity in your overnight courtesy parking spot. (It’s a good idea to travel with 50 or 100-feet of extension cord so you can try to reach a power outlet in the garage, and at least keep the batteries charged.) Show up with full water and batteries so you can live independently if you need to, and be prepared to conserve water and power.

Having said that, it’s a rare courtesy parking spot that has absolutely no prospect for at least a water refill (again, bringing 50-feet of hose is a great idea—don’t rely on your host’s garden hose because it’s not suitable for drinking water). Check with your host beforehand and see what options you have. If they have an RV hookup on site, be sure to thank them profusely, and offer to chip in for electricity if you’re running your air conditioning. After all, they’re saving you $30-50 per night, and probably giving you a chance to experience the local area through their eyes, which is invaluable.